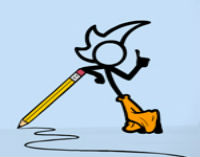 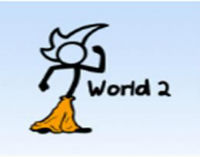 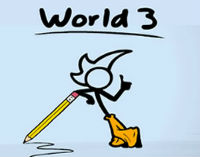 Fancy Pants Adventure 1 is a side-scrolling platformer in which you control a stick figure with a great head of hair and the snazziest pair of orange pants to ever grace the virtual world. Your mission is to lead your fashionable stickman through a world full of dangers by bouncing on the heads of enemies, collecting squiggles, and performing astounding acts of gravity-defying jumping and acrobatics at high speeds. The Impossible Quiz 2 is one of the best versions of Impossible Quiz games that you will ever play on the Internet.

Fancy Pants is easy to learn how to play, with simple, minimal controls: left/right arrow keys for movement, S key to jump, spacebar to pause, up arrow key to open doors, and down arrow key to duck, as well as roll down hills. Those old enough to remember playing Sonic the Hedgehog on the Sega or Mario on the NES will definitely get a nostalgic flashback, as Fancy Pants is able to move much like the beloved blue hedgehog, as seen when he jumps off springs, runs up walls, and hurtles around the map at out-of-control speeds. Much like Mario, there are many hidden areas to discover that contain extra squiggles and power-ups and baddies on which to jump.

Fancy Pants is a great game for seasoned video game players and novices. The controls are simple to learn and very uncomplicated, consisting of only a few options. The graphics are visually interesting and unique; in fact, they very much resemble that which is found in stick figure flipbook pencil drawing. It has this marvelous hand-drawn feel but at the same time looks polished and well-done and, honestly, the overall effect is quite charming. Level design is creative and includes many different elements. With some free platformers, every stage seems to feel like the same level, just in different wrapping, but Fancy Pants’s level design actually makes the game seem like an adventure, not a rehearsed trot through material anyone semi-familiar with video games has seen and beaten dozens of times. Fancy Pants’s movement and animation style is remarkably fluid with a physics engine that has the perfect amount of “floatiness” the character is not bound to the ground, but neither does he float off whenever you press the “jump” key. Overall, the difficulty level of this game will be different for each player, as it largely depends on the amount of skill you have in controlling Fancy Pants’s speed and acrobatic ability. Level difficulty by itself is probably at the upper mid-range level: you won’t break your computer screen in frustration because the game is intentionally impossible, but neither will you get through alive without putting forth some effort and cultivating a fair amount of skill.

Once he gets going, Fancy Pants’s momentum is incredible to the point of being uncontrollable and in the end, suicidal. You will die, whether it’s by zooming headfirst into a ravine or crashing into a bad guy whose presence you didn’t notice because the scenery was going by so quickly. Of course, this is an element of the game—learning to take advantage of Fancy Pants’s speed while not being overwhelmed by it. The ability to control the character plays a huge part in how successful or unsuccessful you are in this game. Personally, this user did not see this aspect to be a disadvantage, but other users have expressed annoyance at this component.

Why are you still reading this? Why aren’t you playing Fancy Pants 1 right now?

All kidding aside, Fancy Pants 1 is a really great game that appeals to all ages and skill levels in a way that most games cannot. Between the unique and interesting character and level design to the actual gameplay, Fancy Pants is a winner in every way. QWOP 2 - Two Players is another website who offers great, fun and addictive game to be played. Check it out!